I used to blog on another platform. Check out what I shared in earlier years here.

This unusual sandwich consists of sliced butter bread that is coated in Marmite spread and sandwiched together with crispy potato chips. Though the thick, yeast-based Marmite spread is originally British, it is incredibly popular throughout Australia and New Zealand. Marmite and chip sandwich is a quickly assembled treat that is usually enjoyed as a filling snack.

Hope you enjoyed cooking with me! Come back tomorrow for more amazing posts, bye for now viewers. ;P

One day three little pigs, the first pig was named George, the second was named Ella and the last was called Jason. They grew up together, and lived with their parents.

After a while their mother said“It’s time you build your own house”. At first the pigs were worried and objected, but the Mother said there was no other way. It was time for them to move out on their own. After all they were grown little piggies. So the three Little Pigs gathered up their things and got ready to build their own houses.

They had to make a plan of what they would make their house out of. The pigs sat down by the fire and thought up plans for what they were going to do. It took a long time, but they finally had a plan. They got right to work. 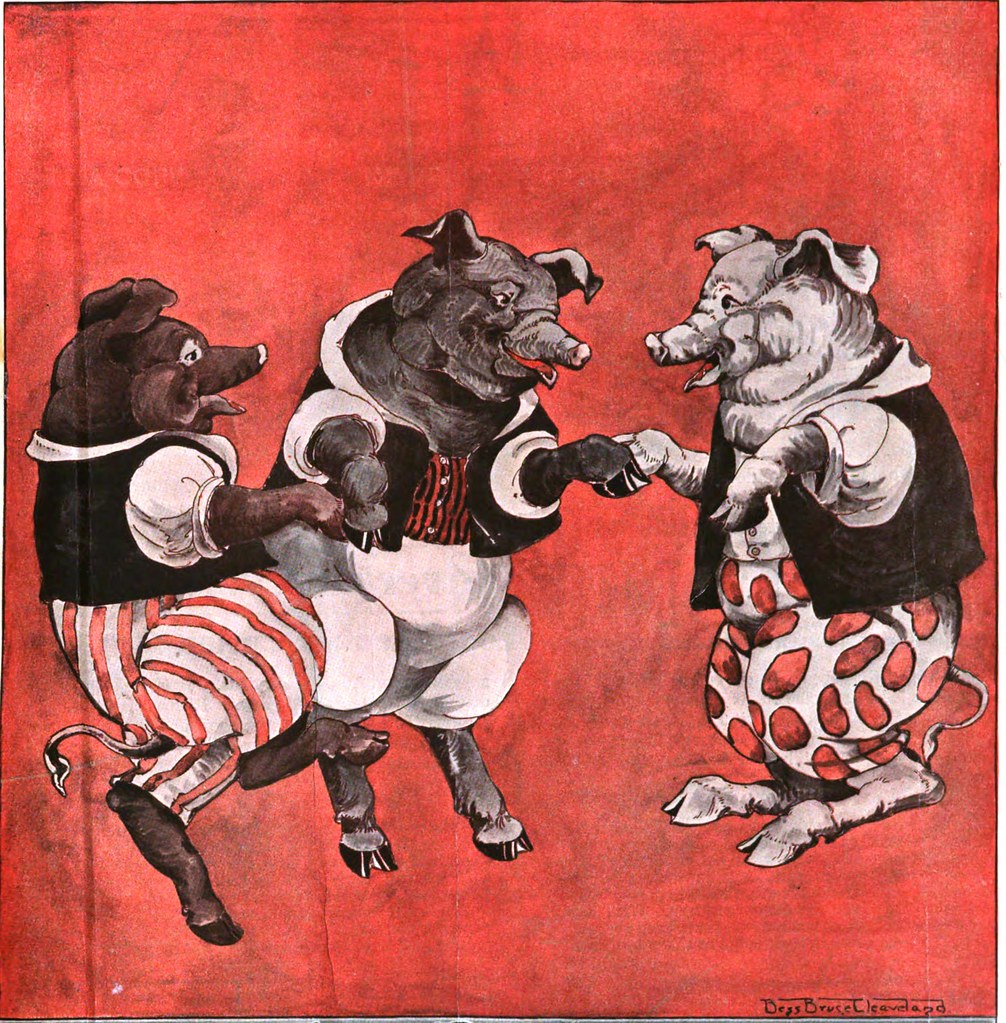 Since they had no money, they were going to have to get creative. After a lot of thought and consideration, they decided to “borrow” some materials from the farmer nearby. They did it at night so there was no one to witness it. Also making it easier to leave without a trace.

The youngest Pig’s name George was going to make his house out of straw, what an idiot, (that house isn’t going to last). So it was easy for him to take his materials from the barn. However the other Pig’s thought that was a bad idea obviously. But even so they helped the youngest Pig make his house. Which you would barely call a house.

They had finished and there was a small shriek coming from the nearby farm. It was the farmer he was barking mad about the stolen hay. The horses were going to starve if he didn’t get some more immediately. The pigs stayed silent, but even so the farmer had seen hove prints on drying dirt.

The middle pig named Ella decided she was going to build a house out of sticks she thought it was going to be much stronger. It was also going to be way more space-ish so she could move around. The plan was already drawn out so they got to work.

After spending a little longer, one night they finally got the wood. The sticks made the house nicely and it was finished during the day. Then Ella moved in and was very happy in her new home. Jason stayed at Ella’’s for the night so they could once again “borrow” material from the Farmer.

They got the Material and built the house which took about 2 days and the farmer had also gotten suspicious. He called in Mr Wolf the expert. He started investigating immediately, he questioned the neighbours and even the farm animals. All which had seen nothing, it was a dead end.

Jason’s house was completed and looking very strong. He moved in immediately, it was large, strong and built tough. He was very nicely settled in when there was a knock on the door, it was Mr Wolf; he came to question the new neighbour.

Using his excellent skills the wolf already knew it was the pigs. The hoof prints said it all. He called back up and immediately arrested the 2 little pigs. The third one however had already made his escape. He ran to a nearby cave and hid out there.

Task description: This week during Cybersmart we made a anmation with a stick man walking. I enjoyed this task very much, and I hope to do more like this soon. Hope you enjoyed. Please leave a comment; thank you for visiting my blog.

Now everybody knows about the little pigs three But this time it goes a little differently. You see I made a couple changes. I set it all to rhyme. Let’s begin our story, Once Upon A Time…

THREE LITTLE PIGS were living large and at home Til the day mom said, Yo! I want to be alone! Go build your own houses now that you are big. It’s time for each of you to be an independent pig.

She told her little piggies, I think I’d better warn ya…… The first little pig built a house made of straw. He didn’t use a hammer and he didn’t use a saw. He finished in a hurry and he laughed,HA, HA! I’m done! I’m done! Now I’ll go and have some fun!

Task description: This week during literacy we had to record a rap with a friend and we had to work on characters feelings and emotions. I enjoyed this task very much, and I hope to do more like this soon. Hope you enjoyed. Please leave a comment; thank you for visiting my blog.

About Me | Ko Wai Ahau

Add the link to the About Me blog post here.

Keep connected with this blog